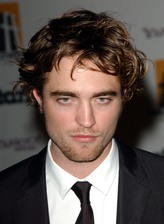 Robert Pattinson is an English actor, model, musician, and producer. Born and raised in London, Pattinson started out his career by playing the role of Cedric Diggory in Harry Potter and the Goblet of Fire. Later, he landed the leading role of Edward Cullen in the film adaptations of the Twilight novels by Stephenie Meyer, and came to worldwide fame. In 2010, Pattinson was named one of TIME magazine's 100 Most Influential People in The World, and also in the same year Forbes ranked him as one of the most powerful celebrities in the world in the Forbes Celebrity 100.

I'm Special Because:
I'm the heart throb vampire in those "Twilight" movies and I date that stone fox called Kristen Stewart.