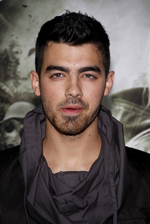 Joe Jonas is an American singer. He is a member of the Jonas Brothers, a pop-rock band made up of him and his two brothers, Nick and Kevin; Joe shares the lead singer role with the Nick. He starred as Joseph Lucas on the Disney Channel original series Jonas.

I'm Special Because:
I'm one of the three Jonas Brothers. Does it really matter which one?