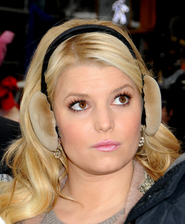 Jessica Simpson is an American singer, actress, television personality and fashion designer. Simpson has achieved many recording milestones, starred in several television shows, movies, and commercials, launched a line of hair and beauty products, and designed fragrances, shoes, and handbags for women. She has achieved seven Billboard Top 40 hits, three gold and two multi-platinum Recording Industry Association of America (RIAA) certified studio albums, four of which have reached the top 10 on the US Billboard 200. Simpson starred with her then-husband Nick Lachey in the MTV reality show Newlyweds: Nick and Jessica. She ventured into the country music market in 2008 and released Do You Know. She has been widely publicized for her relationships, including Simpson received increased Dane Cook, Adam Levine, John Mayer, Tony Romo, and Eric Johnson, to whom she is engaged.

I'm Special Because:
I didn't understand that chicken of the sea was actually tuna.