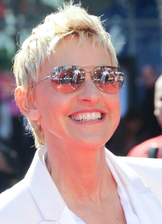 An American stand-up comedienne, television host and actress. She hosts the syndicated talk show The Ellen DeGeneres Show, and was also a judge on American Idol for one year, having joined the show in its ninth season. As a film actress, she starred in Mr. Wrong, appeared in EDtv and The Love Letter, and provided the voice of Dory in the Disney-Pixar animated film Finding Nemo. She also starred in two television sitcoms, Ellen from 1994 to 1998 and The Ellen Show from 2001 to 2002.

I'm Special Because:
I'm the only person who could compete with Oprah and made being a lesbian fashionable.