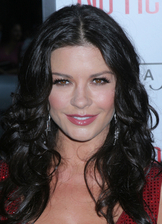 Catherine Zeta-Jones is a Welsh actress. She came to prominence with roles in Hollywood movies such as the 1998 action film The Mask of Zorro and the 1999 crime thriller film Entrapment. Her breakthrough role was in the 2000 film Traffic. Other famous roles includ Chicago, Intolerable Cruelty and Ocean's Twelve. In 2010, she won the Tony Award for Best Leading Actress in a Musical for her portrayal of Desiree in A Little Night Music

I'm Special Because:
I married Michael Douglas, but it drove me crazy.