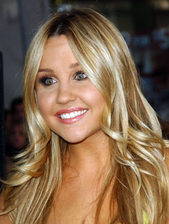 American actress, fashion designer and singer. Appeared in several successful television series, such as All That and The Amanda Show, and What I Like About You. Has starred in several films aimed at teenage audiences, including What a Girl Wants, Love Wrecked, She's the Man, Hairspray, and Easy A. Named one of Teen People's "25 Hottest Stars Under 25" and in 2007 listed her as the fifth highest paid celebrity under 21.

I'm Special Because:
Yet another blonde actress with too many hair extensions.