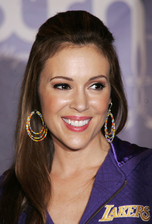 American actress and former singer. Her childhood role as Samantha Micelli in the sitcom Who's the Boss? made her famous, and an eight-year stint as Phoebe Halliwell on the supernatural series Charmed brought her a new round of fame. She was also a series regular on the original Melrose Place portraying the role of Jennifer Mancini. Milano has a female sports apparel line, Touch.

I'm Special Because:
I was special in the 80's, and would like to be special again.