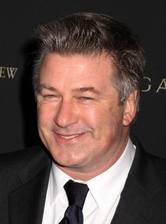 American actor who has appeared on film, stage, and television. Originally known for Knotts Landing, as well as roles in Beetlejuice, The Hunt for Red October, Thomas and the Magic Railroad, Final Fantasy The Spirits Within, The Aviator and The Departed (2006) and The Cooler. Most recently starred as Jack Donaghy on the NBC sitcom 30 Rock. He has received two Emmy Awards, three Golden Globe Awards, and six Screen Actors Guild Awards. Married to (and divorced from) Kim Bassinger. 1 child, Ireland, born in October 1995.

I'm Special Because:
I'm the only Baldwin Brother with a steady job.