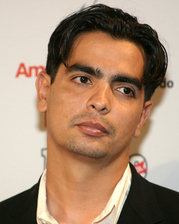 Second-generation Latino chef in New York City, the executive chef and owner of the restaurants Centrico and Paladar. He has appeared on Iron Chef America, and is one of the few chefs whose battles have ended in a draw. On The Next Iron Chef, eliminated in the sixth test, "Creativity Under Pressure". He currently appears on the show Chefs vs. City with Chris Cosentino, and is a recurring guest judge on the show Chopped on Food Network.

I'm Special Because:
I was on Iron Chef and TIED Masaharu Morimoto!